Tim said to Tig the other day, “Serena really stirred the pot with her post on the Boston liveaboard forum.”

I sat up straighter. What could I have possibly said to stir the pot, I wondered? All I did was introduce myself and said that we were looking for a sailboat. We went on-line and checked the thread. Turns out people went off on a tangent debating shrinkwrapping. Phew! On another note, I did get some private email messages welcoming us.

One of them was Chris, who lives on a Jeanneau 39 DS invited us over for breakfast, and that’s where we went this Saturday with kids in tow.

I didn’t bring our camera, but his boat pretty much looked like this! 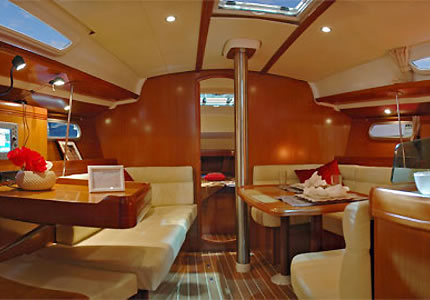 Seriously. It was beautiful, built in 2007, but still had a new boat smell.

“Well, ours isn’t going to be this nice,” I said, trying to set expectations early on.

Chris is a minimalist. He hardly had anything out on the deck or inside. He doesn’t even have a storage unit. During the summer, he likes to be able to leave the dock in 15 minutes. Despite the beautifully kept interior, the boat was very kid friendly. Chris has a five year old son, and was so understanding of our toddler and baby.

Thanks for having us over, Chris! We look forward to sailing with you this summer (fingers crossed)!