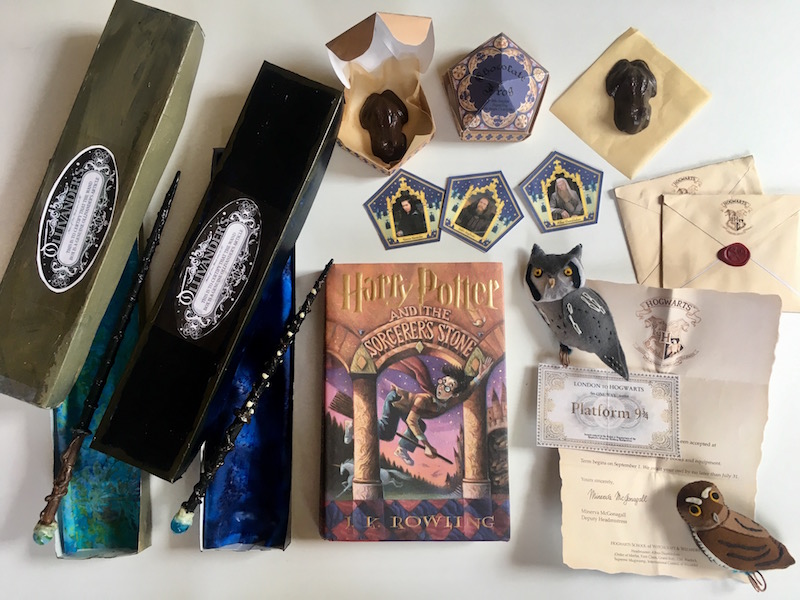 It’s Harry Potter’s birthday! We’ve been cooking up some fun projects since reading the first book in the series (Sorcerer’s Stone) last month. A big thank you for my cousin Tiffany for sending us her collection. I’ve been waiting to introduce my kids to J.K. Rowling’s writings for years. And it was worth it. She managed to win the kids over with the magical world she’s created!

Here are some of the stuff we worked on in more detail. 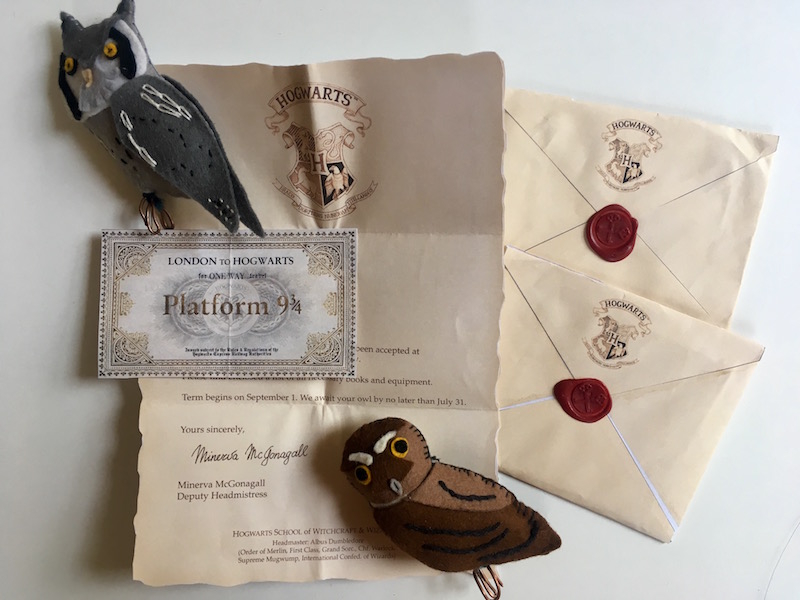 Hogwarts acceptance letters and tickets to Platform 9 3/4, delivered by owl post, of course.

I found these printable Hogwart’s acceptance letters through the mighty internet. The ticket for Platform 9 3/4 was found here. When the kids went to bed, I popped their addressed envelopes, complete with red wax seal, into the mailbox. The next morning I told them I saw an owl messing about with our mailbox and they hurried over to check it out. After receiving their acceptance letters, which were a hit, we kept going down the rabbit hole. 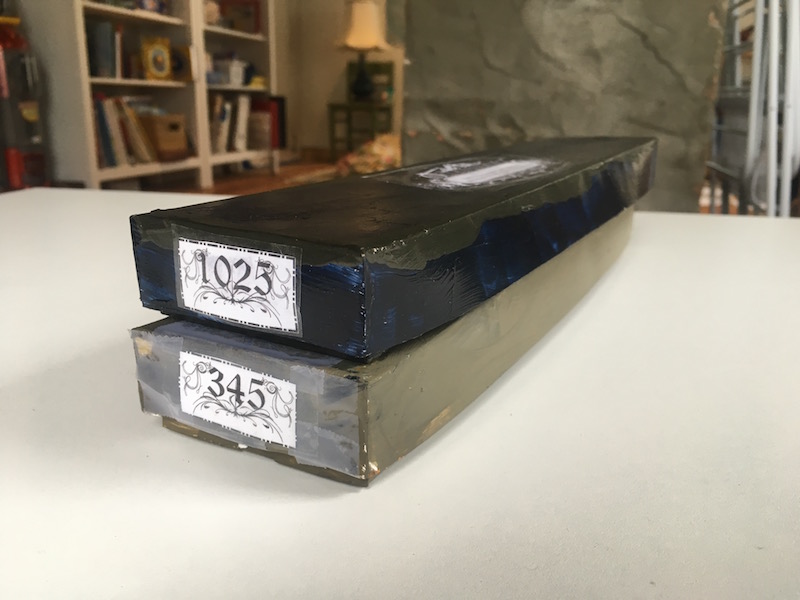 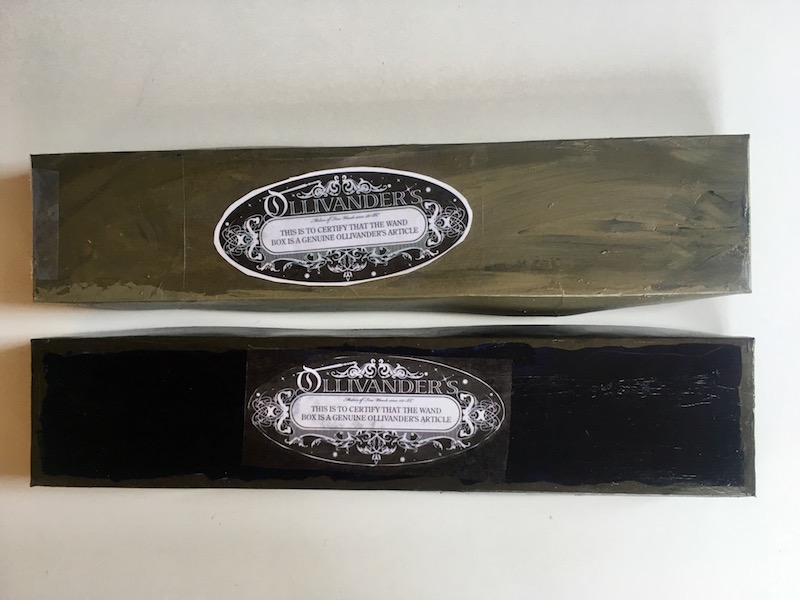 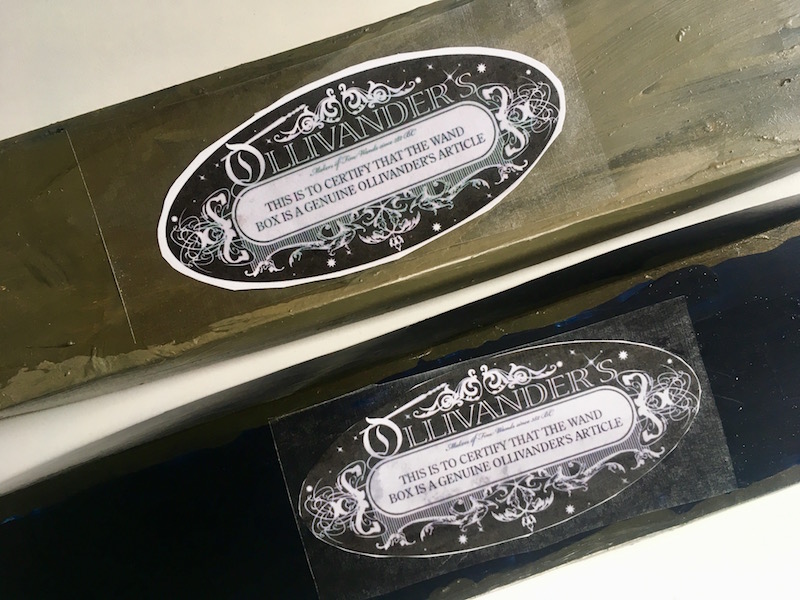 The Ollivander’s wand boxes came from this tutorial. I helped the kids with the measuring and cutting. They painted the boxes and applied the labels. Inside the boxes are their very own wands. 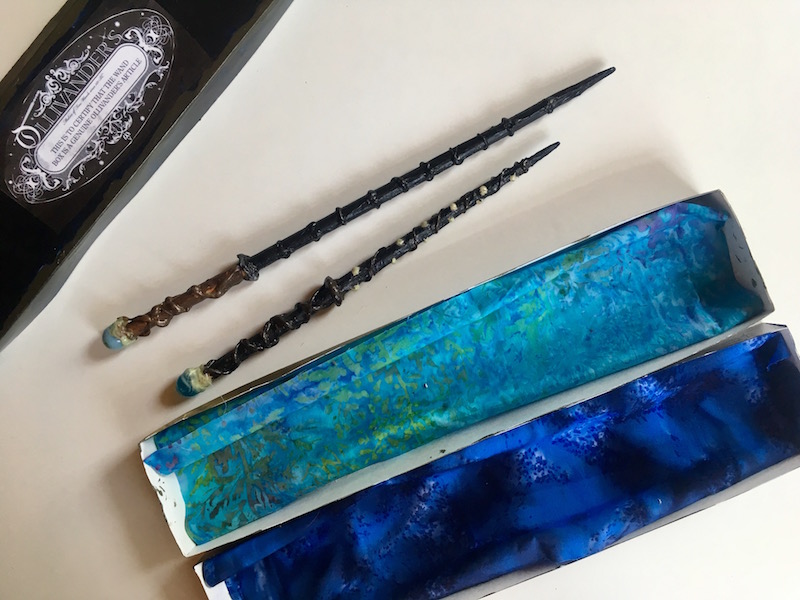 For the wands themselves, I found a simple tutorial that uses a dowel, hot glue gun and paint. But first we went to Pottermore and got the kids sorted into their respective houses. Then they discovered their wands. After the wand “chose” the kid, Tig secured a dowel and cut it down to proper size. The kids whittled shaped the wands using a pocket knife, applied the hot glue gun patterns and painted it themselves. 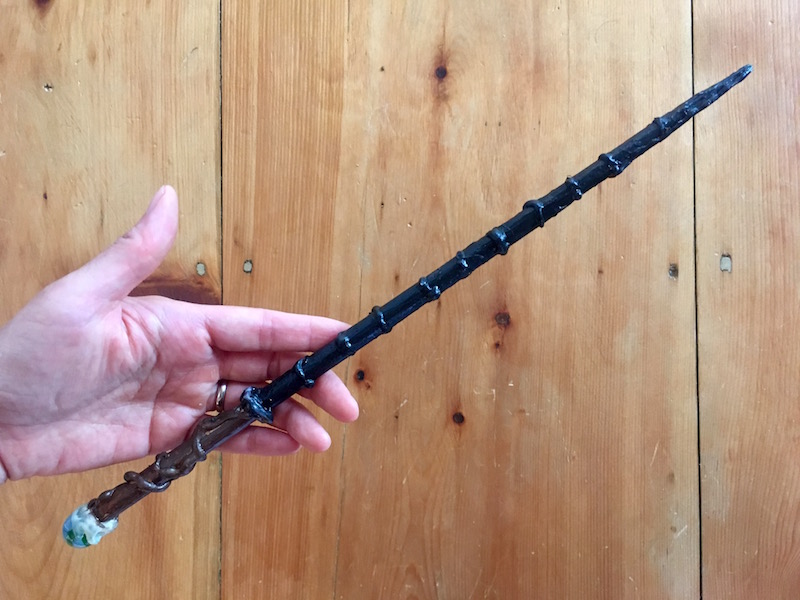 O’s wand is an alder wand with a dragon heart string core. 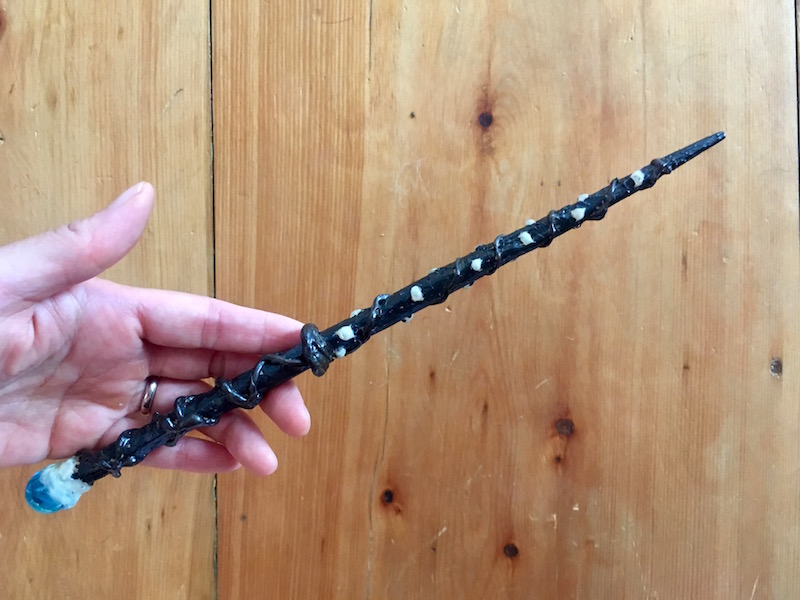 V’s wand is a beech wand with a unicorn hair core. The white dots on her wand are glow-in-the dark paint. She also put some around the base of the clear marble, which makes it glow at night.

Next up are their very own tiny felt messenger owls. 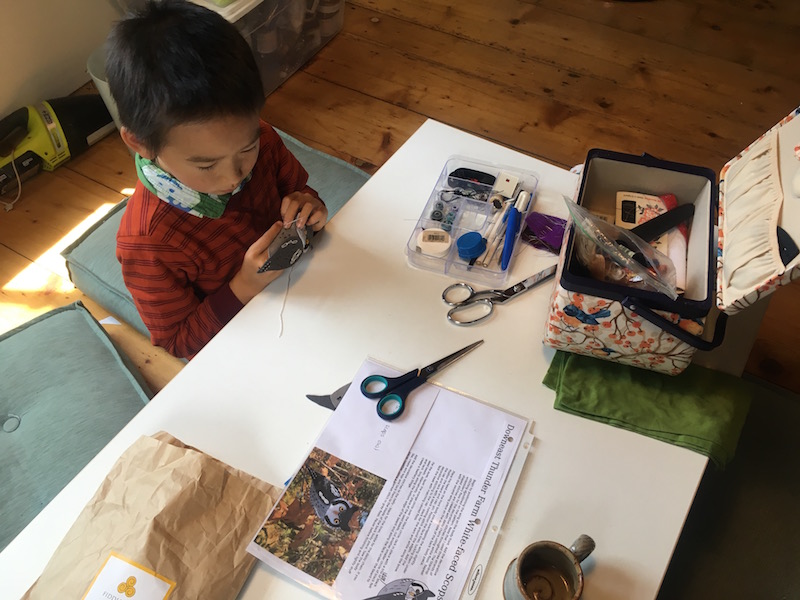 We found these free felt owl patterns and instructions from Downeast Thunder Farm that were just amazing. The kids worked on their respective owls over the weeks, adding detailing and embroidery. 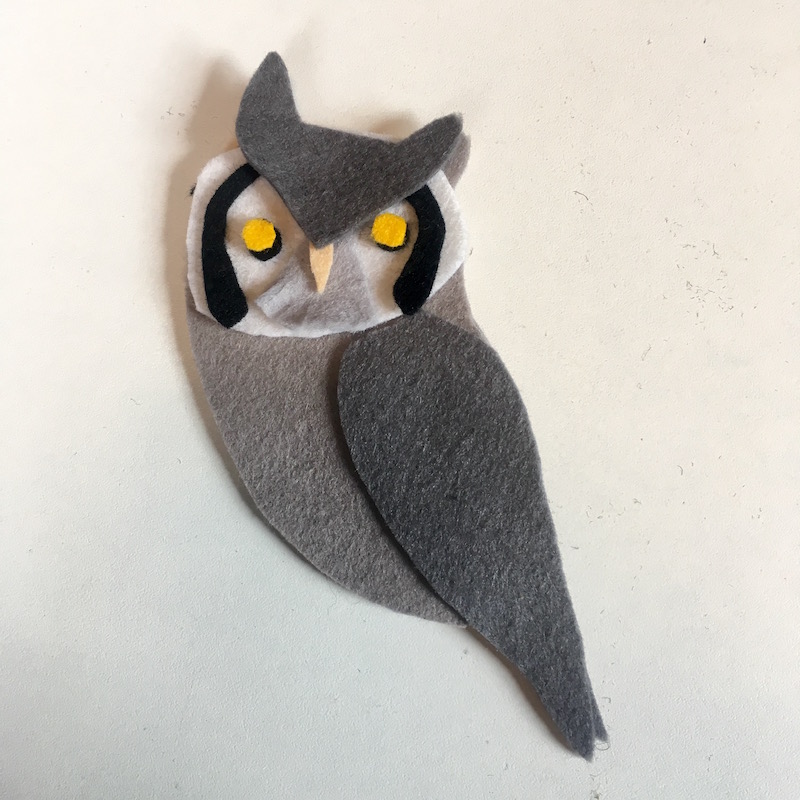 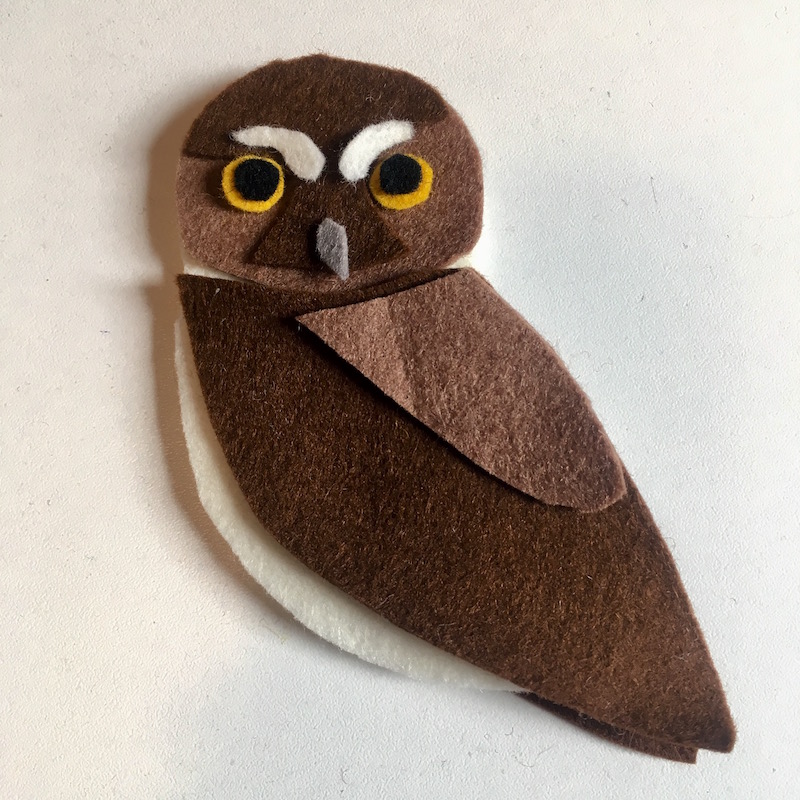 Here are their completed owls, with wire “feet” to perch on their fingers. We researched a little about their specific owls. The northern scops owl, by the way, is known as the “transformer” owl. It was a lot of fun seeing this little guy in action on YouTube.

Lastly, we made Honeyduke’s chocolate frogs, a couple of boxes, and a few wizard cards. 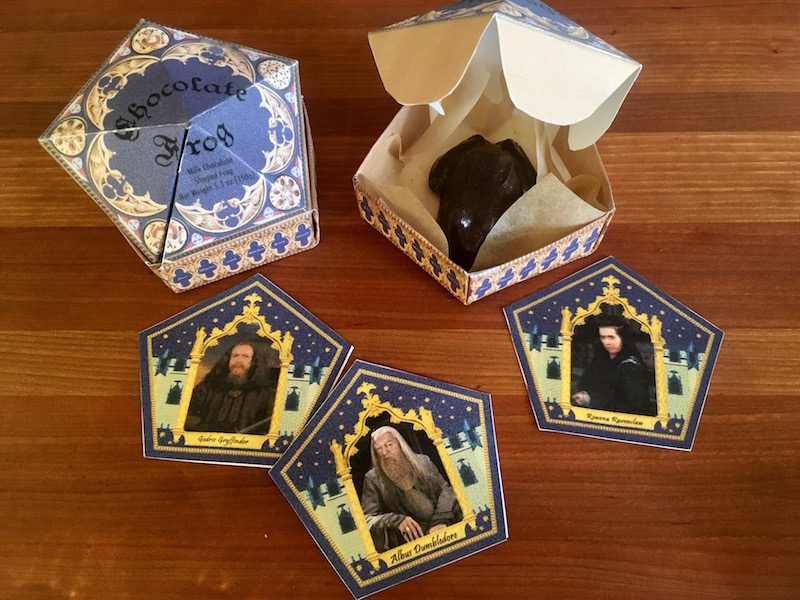 The boxes came from this template, and the cards from here.  If I had to do it over again, I’d use these ones from Instructables. The kiddos complained that they couldn’t read the back of the cards, the printing isn’t super clear. We made 16 chocolate frogs in total, using these instructions. I had a few hiccups making them, since I never ever make chocolates. Still, they turned out pretty well.

More importantly, today we get to eat them…possibly while watching the first Harry Potter movie.