We arrived in Jacksonville area on Sunday night. By Monday, our van was still 3/4 full. Wildie, our sailboat, we decided, was not ready. There was too much to do before I could even start moving in. So we parked by her and set up two sawhorses with a plank of wood. Tig set up the camp stove and propane tank.

It took me nearly two hours to make a ramen dinner that night. Our kitchen supplies were spread across half a dozen tupperware bins. I had to stop every few minutes to find something. I stopped again to help Tig take down the holding tank that he ripped out. Large crushed rocks lined the ground along with fiberglass and bottom paint dust, tripping me as I carried buckets of water. The spigot water smelled of sulfur. All around us were old men, and maybe a couple of younger guys. There was only one family and they had the refuge of an air-conditioned RV. I wanted to cry then. Tig, who was overwhelmed by the forces of entropy at work on Wildie, had little time for empathy.

“You just need to figure out a way to be happier,” he said.

I nearly punched him.

As a gesture to me, he set me up the next day closer to the docks and removed half the stuff from the van. He knew that if he was patient, I would adjust and things would be better. And over the next couple of days, I found a rhythm. My outdoor kitchen looked out over water. I found that a menu of cold cereal, sandwiches, sausage and cabbage goes a long way. I liked washing dishes on the finger docks. 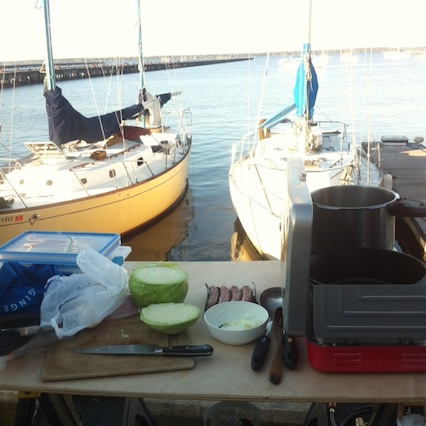 Still, the boatyard was not for kids. All around us were mostly hairy old guys grinding away at their boats. Tig would come to that realization.

“Hmmm,” I said, not responding.

He had been walking by the office and heard one guy declare, “I’ve had enough of your bullshit.” Said man got up and punched the other guy and sent him sprawling.

Tig hurried past the front porch where the punchee was still dazed, and made his way back to the van. Soon he was calculating how long it would take to get the boat into the water. Maybe two weeks?

It didn’t take long for things to get worse.

A cranky old liveaboard didn’t like us parked near his boat. Despite the office manager’s assurance that we were fine where we were, he went straight to the owner who moved us closer to the entrance of the boatyard. There was a spot 15 feet away from the dumpster. Behind us was the swampy ravine and clump of trees.

Then I cried. I was sobbing so much I didn’t hear J, the Office Angel come up to Tig’s window. The Office Angel, a brunette with badass tattoos up her arm and a pretty smile, was the office manager. Between the sobs, I could hear her speak.

“I wouldn’t feel comfortable having your kids here in this spot. There are a lot of mosquitoes here and  alligators in that swamp behind you.  I have children and we’ve lived in a boatyard before. I know what it’s like. And Bob, he’s an old guy and he had children and they lived in the boatyard, and he doesn’t remember. I can find you guys a better spot. I don’t want little children near alligators. There’s a car parked across from where you were before. It belongs to a woman on the bulwark and she’d be happy to move. Just give me some time to get in touch with her.”

I didn’t catch all the details because the words “mosquitoes” and “alligators” released a fresh batch of tears. Before I could believe that I was just being overly sensitive. Now I knew this was a shitty spot, and I would not stay here.

After she left, Tig said, “Let’s go get breakfast out.”

We headed to a local diner. The kids gave me consoling hugs when I got out of the van. I had a hot cup of coffee and felt better. Over breakfast, Tig and I talked.

With food in my belly, I was feeling the fight come back into me. I would have liked to kick some ass. But ultimately, it was more important to do what was right for our family than fight misplaced battles. We were at a working boatyard, not a family resort. It would be shitty for a while.

We decided to find a motel nearby and have Tig work some long days to get the boat ready enough for us to move in. So we ended up at a smoky, cheap Motel 6 for a week. 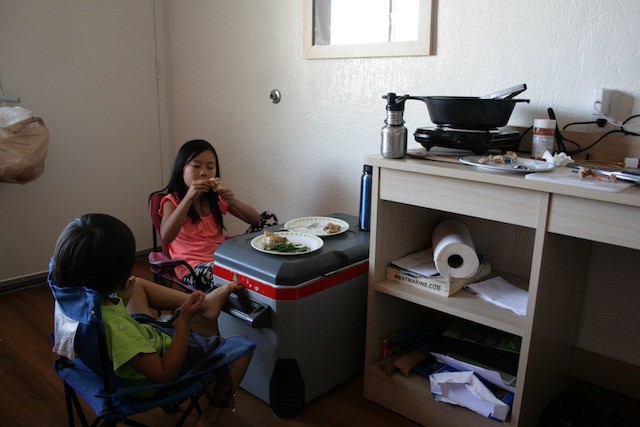 I set up a hotplate and our Engel and made do. We swam in the pool. At night, I could hear the curfew announcement over the loudspeaker.

It sucked. And I acknowledge that this suckiness comes from a western, first-world perspective.

But after a week, we moved into the boat, which was still on the hard. I never saw that cranky, shitty person again. In all fairness, I don’t know what battles he’s fighting, but life is short and I don’t have the time or energy to be the Asshole Whisperer.

And “Bob,” the boatyard owner, I just didn’t talk to him. We heard stories from the boatyard workers (who were all kind and compassionate to us), and from a former owner (who gave Tig a ride once). They came up to us and shared snippits about unsavory business practices, and stories of not treating the workers well. That was enough for us.

Before then, I could feel my heart contracting. My first instinct was to withdraw. I spent all my life putting up walls. I know I would spend the rest of my life tearing them down.

Travel cracks my heart open to the world, to goodness, to the angels along the way.

The office manager who kindly found us another spot, even though we decided to go to a motel.

The boatyard worker who gave us pumpkins.

The dentist in Jacksonville who took $150 off of a dental bill because he had a dream to go cruising. “Sailor to sailor,” he said.

The Publix pharmacist who informed me that amoxycillin was one of their free drugs.

Milah and her sweet kids, who kept dropping off baked goods.

These angels are the bright spots in our lives. They make it possible for me to step away from the unkind. To write about them, but not let them dictate our story.

Because I own it. I get to write it.