We’ve been catching up on rest and taking care of a few logistics like SIM cards and internet access, so here’s the post on our crossing. I want to thank my parents who met us in Miami. They were so wonderful with the kids and helping us with some last minute shopping for supplies.

Leaving anchorage
The winds the day before the crossing were already from the southeast, and they were predicted from the south on passage day. Tig woke up at 3:00 am (yes, he is one industrious captain!) to give plenty of time to pull up two anchors and our dinghy.

At 4:15 am, we left the anchorage near Miami Beach, went around the Venetian Causeway and out through Government Cut inlet. It was about six miles to get out to the open sea plus four more miles until the Gulf Stream. 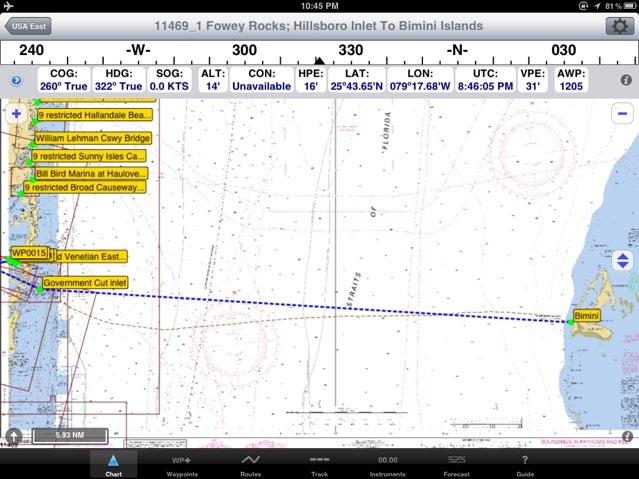 The straight line path from west to east (appx 93 degrees) to Bimini as seen above is called the rhumb line. However, our top speed is only about 6.5 knots and the Gulf Stream reaches speeds up to 4.5 knots. So we pointed down (around 120 degrees), headed southeast and let the stream push us back north, hence the “S” curve in our route. Tig overestimated the curve (originally at 130 degrees) near Florida, just in case his calculations were wrong.

The further south the starting point, the better angle to ride the Gulf Stream. If we had more time to prepare, we would have staged closer to Cape Florida and Key Biscayne. But we saw a great weather window open and wanted to have Christmas on the islands.

Starting the crossing before sunrise meant little or no winds. By 9:30am, the south winds had picked up enough we could turn off the motor and make at least 4.5 knots of speed over ground (averaged 5+ knots). We definitely needed to keep moving, otherwise if we just depended on wind alone and didn’t get enough, we could have been pushed too far north and then would have to beat our way down back south. If that happened, we could also head for the West End of Grand Bahamas Island further north.

All in all, we had a nice close reach / beam reach to Bimini. The sea transformed itself several times along the way. First a smokey slate blue, then like liquid gray metal with veins of gold, and then a brilliant blue sapphire later. On the way, we caught a small skipjack (ceviche for dinner – yum).

Reaching Bimini
Once I saw the most beautiful clear blue waters ahead, I felt relief…for all of a few seconds. Then I realized how clear the water was. So clear that I could see every little thing. I read in our Bahamas Cruising Guide:

[Some folks] think nothing of puttering along the ICW in 10′ of murky black water, but all of the sudden, that same 10′ in the Bahamas reveals rocks and heads that, although deep and posing no hazards to navigation, make a normally reserved skipper slow down and wildly dodge objects far below his keel. –Stephen J. Pavlidis

Guilty as charged. I had a mini panic attack at the bow and ran back to the cockpit shouting that I couldn’t be the eyeballs and to give me the helm, dammit. My eyes couldn’t tell which exact shade of crystalline blue was eight feet vs five feet, what was sea grass and what was coral or rock. I had to drive to keep my hands busy while Tig stood at the bow directing. He was only slightly more composed. We were both wound up entering the channel.

After circling a few times, we entered the anchorage by Bimini Big Game marina under a fairly strong current. There was a shoaling nearby too, as a couple boats discovered later. We put up our quarantine flag and Tig went to check in with customs/immigrations.