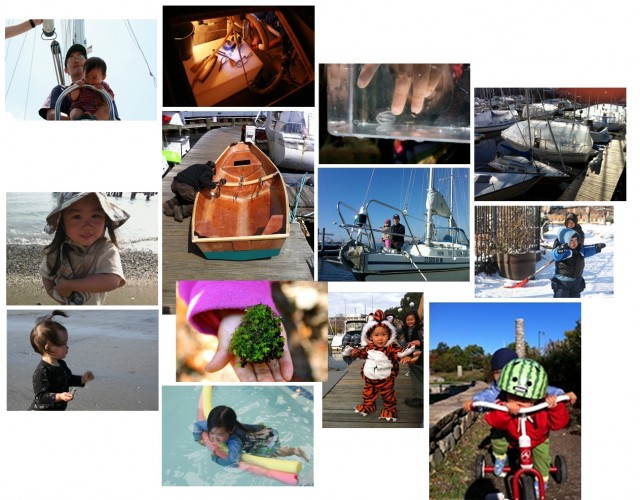 It’s been one year since we bought the boat. And it’s been busy. Here are some highlights and lowlights of the past year.

Spring
After we took over Wildest Dream, we decided to keep her name along with the serious load of boat schwag. Tig assembled a crew and successfully brought the boat up to Boston. A flurry of boat projects ensued, includng: replacing the batteries, fixing our manual bilge pump, making berth cushions…again, stopping leaks, and replacing the propane lines.

We celebrated Tig’s grandma’s 100th birthday with a visit to California last May, and mourned her death this March. I attended a Women’s Sailing Conference.

Summer
In June, we finally moved aboard and began our new life on the water. We had a great first sailing season, which I wrote about here. On the days we were not sailing, we hung out at the pool…a lot. V tentatively started swim lessons. We grilled dinner almost every night and dined al fresco. Sometimes Tig helped to catch dinner (striped bass recipe here). Irene came and went.

During the sailing season, not much boat work got done. Tig fixed our pressurized pump, then abandoned it for other pressing matters, such as upgrading our holding tank.

Autumn
The fall saw us going to the Annapolis boat show, where we met the Pardeys, celebrated Teaspoon’s birthday, and met up with Zach Aboard and a few other cool families. The kids had a fun, albeit anti-climactic Halloween. Tig framed and shrink-wrapped our boat.

As temperatures dropped, we escaped from our boat as much as possible. We visited family for Thanksgiving and Christmas. We house-sat a few times. 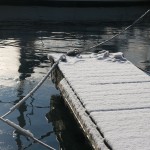 The whole month of December, we spent figuring out our heating situation and tweaking the system. January brought in the year of the (double) dragon, and we had a party to celebrate. January was also the start of the dinghy project which consumed much of Tig’s time for the next several months.

Tig started to ramp up on other projects. Quality of life projects such as installing a new radio and galley upgrades; kids projects such as chalkboard installation and book display; and systems project such as upgrading the AC panel. I started working on the sail covers. 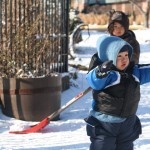 Winter aboard with young kids was hard. They were old enough to want to do things, and young enough to require constant supervision. Some days, it’s utter chaos. We went to museums, visited the library a lot, fed the marina ducks. We made things, worked with our hands, reconnected with old friends.

The kiddos
This past year, little man O turned one. The day before his first birthday, during hurricane Irene, we discovered the hard way that he had a specific nut allergy and ended up at the ER. This past year, I saw my baby melt away and in his place is a toddler. He’s learned to walk, climb the walls, and talk. His favorite word is “No.”  V turned three. I can’t believe the metamorphasis she’s undergone from a rather shy toddler to an active and curious preschooler. I’m so blessed to have spent this precious time with my children. It is priceless.

We’ve come full circle. It’s spring again.
We took advantage of bizarre 80 degree weather in March and ran to the beach. I took a Wilderness First Aid class to prepare for cruising. There are still so many boat projects to finish.

Looking ahead, the future is so uncertain. We can only hold on to each other tightly, and venture forth.