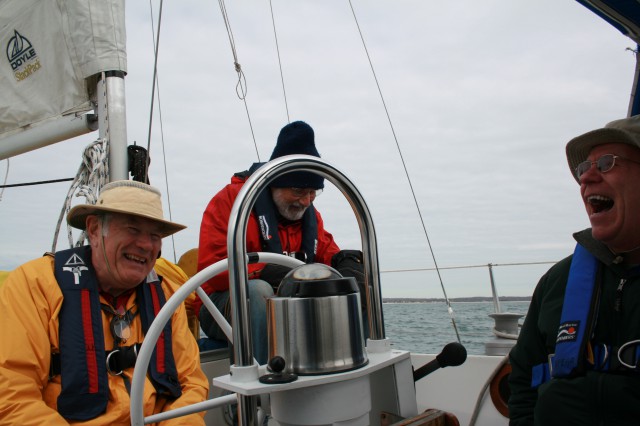 We had a great trip this past weekend helping a new boat owner “Tig” bring his new 1982, 32’, Dutch ketch from Stonington CT to Charlestown MA. The delivery crew consisted of Dick Usen, Earle Beasley (a solid sailor friend of Dick’s), Craig Spear acting as captain and Tig. Like all new purchases this boat had some glitches. Aside from the boat being new to all four of us, it had minimal electronics, no hot water and a 6 gallon holding tank. For assets, we had three experienced boat owners and a new owner who was the quickest study I’ve ever sailed with. After a trip down with one of us to scope out the conditions, we arrived Friday PM with a pile of goodies, including three GPS’s, at least three VHF handhelds, spotlights and more food than four hungry men could eat in a week. I for one never saw most of it. After connecting a plug for our electronics, patching the diaphragm for the bilge pump, and some last minute shopping for boat stuff and a great dinner, we turned in for the night. At 6:30 the next morning we sent our captain ashore for a hot shower to wake him up and after a brief breakfast ignoring most of our food, we motored off the dock at 7:30, hoisted sail and were off.

The first day was spent motor sailing on a broad reach over glassy seas making a bit over 5.5 knots over the bottom. There had been an offshore gale, which stirred up 3-4’ swells which introduced the new owner to a rather unpleasant motion. Eventually we turned the corner into Buzzard’s Bay and the sky started to look more like spring and less like March.  By the time we got near the canal, the sky was blue and the scenery very pretty.

We arrived at the Sandwich marina at 7:15 and found it deserted but with two restaurants, walking distance away! This solved the problem of how we’d cook our steaks without the grille which had been brought to the boat minus its gas regulator.

The night was missing the 20 knot NE winds that’d been forecast for midnight and instead remained calm. At about 6:45 we hauled in the fenders and docklines just as the first puffs of the forecast 10-15 knot NE wind arrived and we were off again. As we cleared the breakwater the sloppy water in the bay woke us up as we started up the bay under Volvo and mainsail.

As we proceeded North, the wind and seas built to 10-20 NE with gusts to 30. By the time we got to Plymouth, all of us were thinking of diverting to Scituate. By the time we got to Scituate, I for one was wondering if I wanted to try Scituate with 8’ seas rolling into the harbor. By the time we got to Minot’s and turned the corner, the pounding, turned into some very large seas that were much closer to our beam and fun to steer through. About this time we discovered the holding tank was full and it was too wild on deck to use the rail. Earle volunteered to go headfirst into the sail locker where the hand pump for the holding tank and the wye valve lived. We had to grab his feet to drag him out. We gave him a beer as a reward for the effort. It’s a good thing he didn’t trip the CO2 cartridge on his life vest or he’d be there yet. Now that we could drink again and the wind swung a bit more East, the rest of the trip was uneventful. We arrived at the marina under full sail with the owner sailing at 4:00.

In retrospect, it was a fun trip mostly. This time of year, the water is cold and the air likewise. It has a lot more heft and the seas show it. I’d equate conditions we had to beating into Buzzard’s bay from the canal in the PM with a counter current and 25 knots of wind. The ride was lively enough that fishing around in the icebox wasn’t attractive. The hard boiled eggs that we’d boiled as we left was about as much food prep as I’d have wanted to do. If the holding tank had been empty, a hard boiled egg or two and a beer would’ve been a fine lunch. Get your carbs where you can find them. I was wearing a canvas, flannel lined shirt, my skiing warm-up pants over my jeans and a down vest with a weather shell over it as well as a hat and my ski gloves. The rest were dressed similarly.  We were comfortable in maybe 45 degree weather. We did have a dodger. I wouldn’t have gone without it. Having a competent novice and three strong crew made the whole trip very relaxing, especially once we no longer had to wonder how we’d cook the steaks. It was a good start to the season.