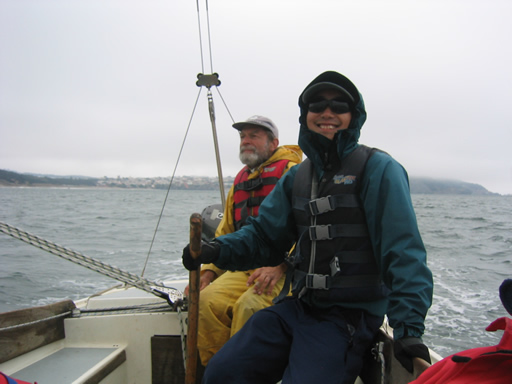 …if you feel your dreams slipping in the riptide and undercurrents of global-market turmoil–lunge after them, grab them, and hug them fiercely to your beating chest. To allow them to slip away would be to accept diminishment. – Captain Fatty Goodlander

Back in 1999, fresh out of college and working my first job, I came across Robert Doty’s website Sleeping With Oars. I excitedly told Tig about this crazy subculture that lives and sleeps on sailboats. He drank the Kool-aid and became even more enamored with the idea than me. Over the next couple of years we went to a boat show and took sailing lessons at the local sailing club.

Eventually, the dream petered out as we didn’t know any liveaboards or sailboat owners to help guide us through what seemed to be an insurmountable task.

Fast forward to this past November. Our neighbors have sold their house and bought a boat to go cruising. We followed Nassim Nicholas Taleb’s advice to go to parties and ended up at a local marina gathering. The dream has been revived.

We don’t want to wait until we’re 65 to get the guts to do something different than “the plan.” You know, The Plan: go to college, get married, buy a house, have two kids (we’ve done all of that with no regrets), buy bigger house, bigger car, accumulate lots of stuff, retire someday, and then you can live your dreams before you die…hopefully. It’s the second part that I wish to avoid.

I’ve always been fascinated by tiny homes, small space living, little Airstream camper vans and sailboats. Living and working on a sailboat together will be hard work. We expect it to be. But hopefully, it will also be a fun and worthwhile adventure.

Maybe this crazy idea won’t pan out. Maybe we’ll try it and conclude that boat life isn’t suited for us, that we would prefer to live in a little seaside cottage or a farmhouse instead. It doesn’t matter. As long as we don’t stop dreaming. Some people want to travel the world, others want to go back to the land and live off the grid. I just want to hold on to my spirit. And my kids.

And now, a confession. We haven’t told many people about our plans. We don’t want to subject ourselves to critics or naysayers yet, not until we have a boat in our hands. Even well-meaning friends and family often have a vested interest in keeping us on The Plan.

What are you doing to protect your dreams?

6 Replies to “On holding on to dreams and a confession”