Here are some quick notes from our winter math block. I planned a couple of structured activities, but mostly we deal with math in our daily life. V and O notice numbers on license plates, at cash registers at the grocery stores. They quiz me (“what’s 2+2? 4+4? 8+8?) at all hours of the day. They wonder aloud at breakfast, like this conversation back in February:

O: What’s the number before infinity?

Me (thinking aloud): That’s a good question. How about “Infinity – 1”?

V (pause): Isn’t that the same as infinity?

O: I love you infinity.

Me: Awww, I love you infinity too. And how much do you love daddy?

O: Infinity – 1. Which is the same as infinity. Just a little less.

Their conversations about numbers weave in and out, sometimes dropping off, only to pick up the threads later on.

Here are some of the structured activities we did. 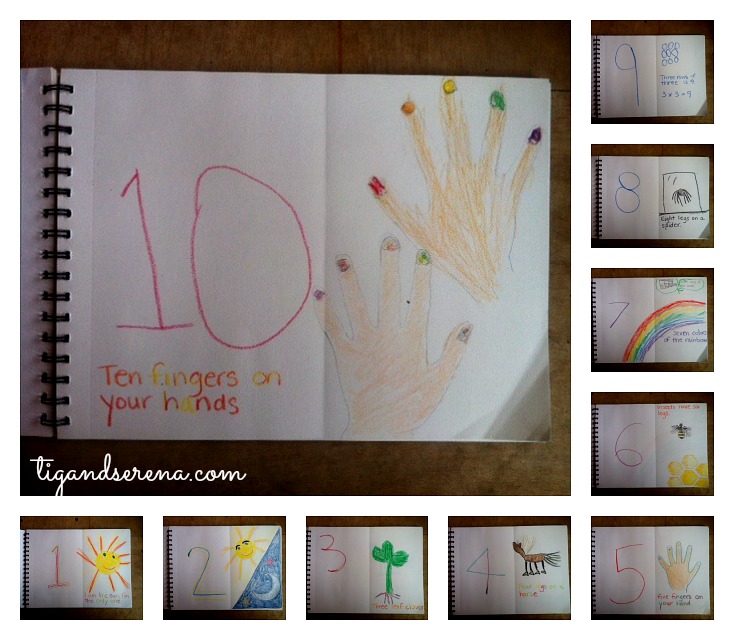 :: illustrated the concept of the numbers 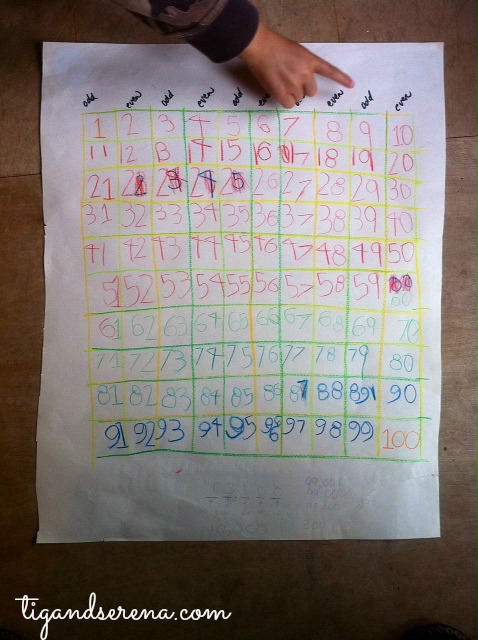 I made a grid for V with only two numbers filled in (1 and 100) and presented a game. She would get 10 cents for each number she filled in. The only caveat was that it had to be correct and she needed to figure out how much money she’d get.

She finished in an hour–with a very interested O hovering over her–and corrected as she went. Best $10 spent. She often refers back to the chart and to look for patterns.

V is very interested in money lately: how to get it, where to keep it, how to spend it. In March, we visited three local banks to learn about their kids savings programs. I wrote down basic information on fees, interest rates, and fringe benefits (free popcorn on Fridays, anyone?). Then we sat down over some hot chocolate and discussed each bank and its features.

Tig took the kiddos to open their savings accounts at two banks. They each received a ceramic piggy bank and V is making deposits.

:: Made their own coins using wooden discs and paper.